Crossing Cambodia's Great Lake and journeying into the heart of darkness 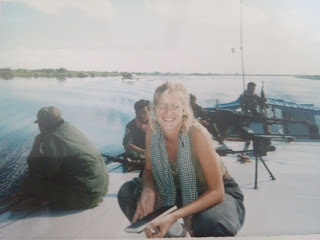 Crossing Cambodia's great lake, the Tonle Sap, on a heavily armed boat with Liz Gilliland. Siem Reap 95.
Crossing the Tonle Sap on a heavily armed boat heading into the Khmer Rouge infested marshlands '95. Just visible in front is an armoured naval patrol boat and we had fifty cal machine guns mounted in skiffs on our port n starboard sides. We were not taking chances.This was the badlands. It was also beautiful. And I had just fallen in love with Liz, featured. This was my idea of a heavenly honeymoon. Everything fascinating and terrifying about life ram-packed into a day. A gov anti Khmer Rouge unit had been accused by the UN of going rogue and kidnapping for ransom, maintaining a secret prison in the marshlands, murdering those without ransom money to pay and dining on their livers. All the usual lovely stuff. So armed up to the teeth, the gov took us across the lake and into the marshlands. The purpose was to show us that there was no secret prison ie there was no massive old colonial fortress with bars. But you didn't need that shit. Out there there was no escape. You were upriver in Col Kurtz territory. We stopped off on a nearby little island where jittery gov troops were dug in with deathly seriousness in a unprecedented disciplined manner. These guys were not messing around. And whatever went down as sun did too was real Heart of Darkness drama. Sometimes the war seemed distant, almost quaint. But not out here. That's why there were three other gun boats escorting us. Tried to interview some locals about prisons and prisoners but with gov officials and soldiers all around, we got nowhere. Adding later credibility and added horror to the report was the subsequent attack on a UN official outside his home in Phnom Penh. Assailants stole his car. With his 3 year old daughter still in the back. She was later dumped outside the royal palace. A supposed act of mercy as it was a place she would soon be found. Not so merciful was the fact they shot the toddler in the leg. This was a daughter of a man who worked for the office that produced the report about the secret prison way out on the lake. So we're now back on the lake. Starting the return journey. Feeling a bit more relaxed. Thinking this is some holiday. But despite all the colourful and panoramic vistas and the fact that we were way way way off the still to emerge tourist path, there was the incoming from the brutal backdrop of violence, war and tragedy. Fresh love and novel passion was doing a good enough job at providing Kevlar for my soul and keeping the horrors at bay. But you were not allowed to just sit and dig sunsets. Not in this show. So it was good to have company as distraction. And all of the accompanying intensity of 'foxhole romance.' And Liz was thrilled to lig along. And presumably to be with me. Hopping the helicopters and boats without question. I was being treated like a big shot. If it wasn't so comical I might have tried -and then failed - to spin it as impressive. But enough about me. The entourage on the boat stopped off at floating crocodile farms and other fishing villages. Although most of the big floating fishing villages had disappeared. The Khmer Rouge had pulled off a successful campaign to ethnically cleanse the area of Vietnamese fishing people who lived in boathouses in floating villages along the great lake. Attacks culminating in a 93 massacre of around 40 villagers led to a mass exodus down the Mekong to the Vietnamese border. There was very little sympathy forthcoming from most Cambodians at the time. The usual show. Brutality and beauty. As King Sihanouk said: "We smile but we also kill." What a day.
Pic by me.
Posted by Barricade at 2:19 PM No comments:

We smile but we also kill. Genocidal Buddhism

Wow just spotted it's 30 years since the signing of the Paris peace accords that slowly brought an authoritarian peace to Cambodia and set me on the road back to Phnom Penh. I had bribed and hustled my way there in 90. But Saddam Hussein ruined my gig by crossing the Kuwaiti border as i crossed the Vietnamese Csmbodia one. With the arrival of the UN mission, Western embassies, NGOs dreamers schemers writers grifters adventurer-seekers war junkies and n out n out lunatics this once isolated capitsl became a wild east goldrush town. You could hop a UN helicopter to conflict zones and be back the next day eating fine food and telling tall tales with some of the most marvelous people I had the pleasure to meet. It was a toxic mix of beauty, genocidal trauma, deadly politics and fascinating characters like King Sihanouk. Every day was a Graham Greene novel. The place fucked your head in every possible way. The dwindling war could still be deadly as dear friends discovered and poor peasants trudged away from annual dry season offensive with biblical stoicness. War had become part of the national dna. As Sihanouk said " we smile but we also kill." They did both with gusto. On a meta level the opening of the country made the secretive xenophobic Khmer Rouge less tenable. Western, Chinese andThai backing slowly shifted to the Phnom Penh government, many of whom were ex Khmer Rouge. Everybody killed. So you were forced to make pragmtic judgements about who killed less. We had a rave in a graveyard. And there was something kind of sinful about it. But the politics was intoxicating. The work was relentless. As long as you banged out fast and accurate copy- which Sambath Reach RIP  and i did with aplomb aided by Brian Hansford, Carol Livingston and Liz Gilliland - nobody interfered with you. This needless to say led to some outrageous behavior. Life was cheap in all senses. As were drugs, booze and guns. I hadnt any problems  with drugs or booze but i drew the line with guns  i was a rare joutno who never carried anything more dangerous than a wild .mouth, an observent eye and a can  of mace. I turned 30 there and left 4 years later. I recall saying to my dear friend and Master Musician of  Joujouka manager Frank Rynne when the band opened the 200,000 plus Glastonbury festival with an Islamic prayer and some ancient Sufi rock n roll that this was the most fun I had since Csmbodia. It was  a similar heady mix of politics  poetry, rock n roll and angelic propaganda. Pure beauty. But cheers to all my  Cambodian mates. It took real courage to be an independent voice at that time. We were all return ticket revolutionaries. You guys were the real deal. Shame our ranks have been so decimated by untimely death. Seems to go with the territory. But fuck me, it's been hell of a privilege. Dropped in and out of Bosnia and Africa but never really felt the same intoxicating sense of riding raw and raucous history again.

Posted by Barricade at 7:05 AM No comments:

Kevlar For The Soul by Kevin Barrington for Liz

Posted by Barricade at 7:41 AM No comments:

Kevlar For The Soul

Yo
Listen up
Just been told.
Am on
An active waiting list.
For
A ward.
So….
Congratulations may be in order
Yeah yeah yeah yeah
But really, where else would you find me?
Hardly on the passive one
Cos that doesn’t sound at all like me.
I’m the active dude
On the active  list
That’s right, that’s cool, that’s just
That’s perfectly suited to me.
Yipee
A ward
A ward
A ward
Another a ward
In a life that’s been full of on and off
A ward
A ward
For scallywagging
Scallywagging
All across  the universe.

Now I need you back Mr Kevlar.
God I need you back real bad
Cos Kevin here has just been told
The a ward they have granted him
Is the very  same one
They granted
To a wonderful sweet august person
That just happened to be
His dear dear Dad
That’s right you heard me
The same as my dear dear Dad
I don’t think I can overstate this
My dear dear Dad
Dear dear Dad
Dear
Dear
Dad
How
I miss you
Then I listen out
And catch his voice.
In its loving reassuring tone
And he is saying
Don’t panic, relax now
My sweet sweet son
The Kevlar I can offer you
Is the fact you won’t be alone.
The fact
You won’t be alone
Posted by Barricade at 3:45 AM No comments:

Ended up
On Burgundy.
Been some time
Me and fine wine.
Subtle scents
Of trouble
Of strife
Of M16 whites
And AK reds
All followed by
Sweet sweet adrenalin Sauternes
Laid down long enough
Rapt in conflict
Picking up
Historically
Transmitted
Disesase
Sweet undertones of unadmissable addiction
Premier Cru
Adrenalin.
Pour
Pour it
Pour it
Mister Psychopath Sommelier
Give me the rush.
The wild psychedelia
Of the slightly off target shell.
Raise a glass to the dumb fuckers
For missing.
Missing
Missing
There’s something missing.
Waiter
Waiter
My soul is corked.
“What the fuck do you want me to do about it,” he asks
with that touch of Gallic disdain.
"You chose your cellar.
Now you go die in it.
And don’t come whinging to me
Looking for grapes
And sunshine
At this late stage of the game."
Posted by Barricade at 4:34 AM No comments:

A Cautionary Tale About Life And Death

Getting bored with life is not to be recommended

Cos you just might get a taste of death
And not a heroic jump on the grenade sort of death
A posthumously recognised death
No.
None of that shit.
Instead.
You just get a good old gut shot
Kind of death.
Cold thirsty moans as you bleed out alone
Kind of death.
Yep.
That's the exact sort of death you're likely to get
When you deem your lot insufferable.
Aint that the truth.
The whole hard nothing but the truth.
Posted by Barricade at 9:38 AM No comments:


I'm a Dublin dog
Barking mad
The sky ripped with Chinese explosion
I'm a cat in Idlib
howling at the bloody moon
crisscrossed by irate fighter
I am a Raqqa rat
Loving it!
Glad we stayed
Unlike Aleppo foxes scuttling away
Some now thinking of return
We hear
But to what?
Fleeing over greedy land, heartless sea, bitter border guard and always the indiscriminate baton
Walking
Walking
Walking
Spittle
Anger
Suspicion
The chorus:
''Fuck off home'
Home
Home?
Angry spitting crowds bearing batons.
Cowering, why why enough enough
Others came with care and clothing
To be fair
And we were suspicious
cos they sought nothin in return.
Suspicious of kindness
But not far the noise, the noise
'FUCK OFF HOME' they roared
Home
Home?
'Where is my home? Do I have a home?' my friend asked.
Then he went into the trees
Into the silence
Then in the quiet of night
A small window lured him
Into the still grand life of Berlin's fabled Pergamon
There inside:
Aleppo
Aleppo
Ancient Aleppo
Before the dust
In all its quirky courtyard beauty
Aleppo
before the mosaic of madness
Aleppo
My ancient friend
Aleppo
Here you are now .
Here we are now.
Both you and I together at last
at this forbidden time
This city that knows the destruction of ours.
I lie down and weep.
Amongst our pristine beauty
My roars, my tears, my howls, my art, my city, my country!
Roar as alarms shriek across Berlin city
And here some will say no gratitude
Other will pray for salvation.
Pray for salvation.
Posted by Barricade at 1:42 PM No comments: