It's said that if you head off looking for the blues' genes you end up somewhere south of Timbucktu. Well the Malian embryo and the Missisippi evolution came together in divine celebration last Saturday in Dublin's Unitarian Church. Mali was represented by Boubacar Traoré who grooves in a similar musical and emotional niche as that of his northern Malian friend and other renowned desert bluesman the late great Ali Farka Toure 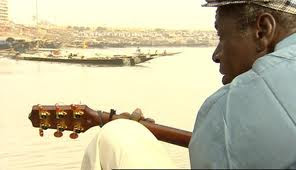 Providing soulful heart beats on calabash was Losseni Kone. (In parts of Africa large calabashes are hollowed, dried and used as percussion instruments) The blues was represented by Vincent Bucher who managed to blow the sound of a vast orchestra out of a sole harmonica. 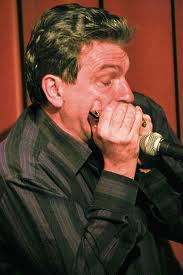 Dublin was granted a glimpse of this African guitar legend ahead of his headlining appearance at the 30th anniversary at WOMAD festival in the UK. A few have trodden a similar Delta to Desert path before with perhaps the best known being Ry Cooder and Ali Farka Toure. The two joined to create desert blues soundscapes of the most exquisite joyful gloom. In more recent years more people have become hip to similar sounds as Tuareg group Tinariwen have toured these shores and Damon Albarn's enthusiasm has highlighted the Timbuktu’s Desert Festival run by promoter, journalist and former Tinariwen manager Andy Morgan. The festival is now threatened by Islam's dour puritanical forces Al Qaeda in the Maghreb who frown on music and poetry and have recently have been destroying Sufi shrines in the area. Various regional players may have a hand in promoting this Al Qaeda branded instability. For a good analysis on the situation, see Andy Morgan's fine in-depth piece here: http://thinkafricapress.com/mali/cau...rn-mali-tuareg But back to Stephen's Green. Instead of rolling desert dunes, Traoré took to the stage/altar against a shimmering stain glass backdrop and carved stone slogans of true Christianity. The Unitarian Church provides the perfect home for such spiritual sounds, as it is hosts one of the few branches of Christianity not to have betrayed its sacred clothes to camouflage rape and pillage. Promoter Gerry Godley and his Improvised Music Company also deserve a mention here for the decidedly un-Tiger timbre to the whole gig. Tickets for the gig, which sold out instantly, were a nigh on mendicant friendly 12 Euro. The church soon filled static reverence and sounds of such grace as to lure the deities out to dance. If one was addicted to complaint, you might posit the idea the audience was almost paralyzed in its reverence - with barely the sound of a foot tap. But then your complaint would have to deal with the applause at the end. A wall of applause that would have made Phil Spector jealous. 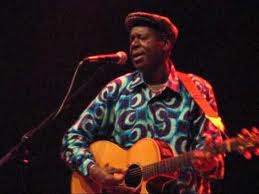 I haven't seen such ferocious clapping since it was thrown at Joe Strummer in his first post Clash appearance with the Mescaleros at the Olympia. Wild appreciation laced with a touch punk challenge defied 15 minutes of blaring house lights and led Joe to retake the stage and repeat a number as they had run out of rehearsed songs. But tonight, what the Unitarian Church lacked in punk chaos, it made up in religious communion. And as the crowd spilled out into the still bright night, there was a touch of the mad evangelical to the eye. All in all spellbinding. The sort of event that cleanses the soul of all the despair inflicted by this ill-choreographed Riverdance country of ours. __________________
Posted by Barricade at 9:54 AM