A diary of an illness.
So desperately needed.
My battle with.
Fear, cancer, baldness, bad breath, death.
Whatever you're having yourself.
Oh so brave.
And not even a breast to lose.
But let's fess up.
This one's not for you.
It's for me.
Throwing shapes at fear.
Puckin words in the wind.

Now the comeback tour.
So here we go.
We're here to go.
Whistling in the wind.
Spitting in the gale.
Down dark boreens.
With desperate 'dia dhuit'
Conas ata tu.
Conas ata tu.
Not very well.
Since you ask.
Been a lot better.
But there you are.
A lesson in?
Whatever.
Interfering?
Interferon.
Here we go.
Here to go.
Conas ata tu?

Hey.
What can I say?
Sometimes you have to make a living.
Bryan Adams.
In Vietnam!
For fuck's sake!
But fate, as it does, threw me a curveball and presented a lady with whom I subsequently fell madly in love.
Can't work out whether she scared me on the night or I thought she was a ditz or I had more pressing matters to deal with.
But we rose to an encore.

“EVERYWHERE YOU go, the kids wanna rock,” sang Canadian Bryan Adams, and his Vietnamese audience endorsed the view – though some of them seemed a little uncertain how to rock.
Adams’ debut in Ho Chi Minh city was the biggest concert in Vietnam since Bob Hope tried in vain to boost the morale of US soldiers fighting a lost cause in the 1970s, the promoters said. But Adams himself chose a different frame of reference, pointing out that he and his four piece band were the first to put on a live rock concert since James Brown bared his risqué soul in Saigon way back when.
The concert came hot on the heels of Ho Chi Minh’s second international marathon, with the same people promoting both shows. As an act to follow Hope, Brown and a marathon, Adams was the perfect choice.
His wholesome, anthemic rock and his high-octane sentimental ballads – like the syrupy tear jerkin’ hit ‘(Everything I Do) I Do It For You’ – provided the perfect kind of fun for guys and gals who’d just run 42 kilometres and needed middle of the road dance-and-romance of the same epic overblown proportions to come down to.
It was no accident that this clean, green, eco-friendly rock star was allowed to be first to bring live rock back, back in the SRV – the Socialist Republic of Vietnam to the un-initiated. His group were on an Aslan tour capitalising on the marathon sales of his latest album So Far So Good. He requested to play Vietnam but first he had to be thoroughly vetted. “The government screened my records, videos, press statements, everything I have done,” Adams told Hot Press after the show.
Adams’ espousal of green issues seemed strangely lost on the Ho Chi Minh crowds, who have recently woken up from their socialist hibernation and embraced capitalism with all the zeal of born-again converts.
“There’s so few cars here, it’s amazing. No cars that’s great, that’s fantastic,” he told the audience who looked more embarrassed than heartened at the observation.
Adams, who has a reputation for putting on powerful, energetic live shows, said afterwards that he’d felt a bit intimidated by being the first kid to rock again in Vietnam and so “held back” on stage, afraid that if he really let it rip, things might get out of hand.
“I didn’t want it to get too wild. I didn’t know how the police would react. You have so much control but why cause panic?” he said, before adding, “The next time, man.”
With tickets selling for up to 35 US dollars, there were few real kids in the 2,500 strong audience, almost half of which comprised westerners.
And, although there were people dancing in the aisles much to the discomfort of the electric-prod waving police, the local crowd needed some prompting on the mores of rock concerts from their foreign counterparts.
When the band walked off stage, a group of Vietnamese girls asked a screaming Canadian fan if Adams would come back. “Yes. But you have to make noise first,” the frustrated fan said. The Canadian fan then jumped on stage to rouse the relatively silent house.
The girls up front, however, knew all the basic moves: everytime Adams came within reach, his legs were fondled by dozens of outstretched hands.
Backstage, the singer said he enjoyed playing Vietnam but he was a bit apprehensive about re-injecting rock and roll into the mainstream of this “innocent” society. “You bring pop culture to a country where the average annual income is 120 US dollars. How do they afford it?” he asked after the show.
The city has a charm and innocence that comes from living in a time warp, he observed. “I’m not sure if what we have done, however, tonight is a good thing. I would hate to see this city turn into Bangkok. That would be a terrible shame,” he said. Despite his observations, however, he admitted that his agents were making “tentative” arrangements for another concert.
Adams refused to be drawn on political issues and replied to a US reporter’s questions about Washington’s ongoing economic embargo by saying: “That’s your problem, man.”
The girls up front were clearly unconcerned about embargoes and had no qualms about live rock and roll staging a come-back. Screams like a chorus of cats in heat erupted when Adams sang: “I don’t want to argue, I don’t want to fight, I don’t want to talk politics all through the night, all I want is you.”
Clutching a plectrum the singer had thrown from the stage like a precious stone, one 19 year old said: “I’m very happy. This is the first time the foreigner singer come to Vietnam so everybody in Vietnam likes to shake hands with the foreigner.”
Adams closed the set with ‘The Summer of ‘69’ featuring what he has described as his “best lyric” to date: “I got my first real six string, bought it at a five and dime, played it till my fingers bled, it was the summer of ‘69.”
If the Vietnamese – who would have faced more serious threats to their well-being than guitar strings – had more gory memories of the summer of ‘69, they weren’t letting them spoil the show. •
Posted by Barricade at 6:40 PM No comments:

Posted by Barricade at 6:36 PM No comments:


Curmudgeon encroaching.
Fortune let prevent a picnic.
So instead of alight to Tindersticks.
Or going winter-defying mad.
A Woman's Heart. 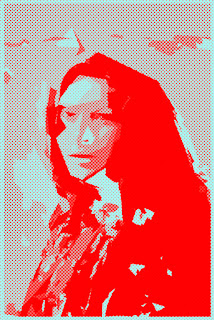 No electric.
Only a woman.
Indeed.
Eek.
But listened to Dolores Keane.
Who was pure festival.
And that was enough.
So with 'no-one is callin' me a misogynist' pride.
I walked the Navy/Notre Baghdad steets
Of the Gathering Dublin
Until safe home.
Posted by Barricade at 2:45 PM No comments: