Phil Lynott, Dr Seuss and Eminem stroll into a bar.

They sit down, have a few drinks and start to have a raucously good time. That’s the sort of vibe you get from writer and performance poet, JOHN CUMMINS.
John would argue that Bob Marley has a place at the table too. “Bob Marley was huge where I was growing up. You’d hear him out of literally every window. And sure Dalymount Park was one of his last gigs.” John cuts a curious figure. Skinny. Tall. Thin. Bearded. But with a wild braided bardic beard, not a hipster one. Overall there’s a gentle, affable groove to his tripiddy-hop style. 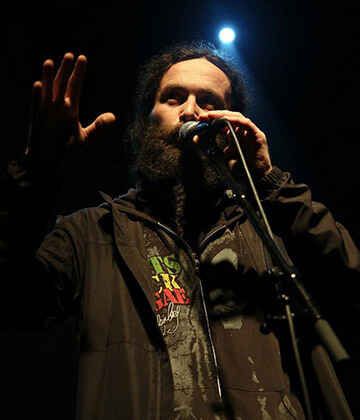 So this poetry business? How did it all begin? Well, not that he makes a big issue about it, but John grew up in Darndale. And poetry was a pursuit you didn’t broadcast. It was kind of secret and furtive, he says. But words intrigued him right from a really young age....

https://dublin.ie/living/articles/city-of-words-john-cummins/#.WMbgv2jCLTE.facebook
Posted by Barricade at 9:19 AM No comments:


How a suspect president used the war on terror to change/subvert the world and sculpt the domestic US landscape. Giving birth to the world of suspicion. Suspicion. Not inequality. Suspicion. Them. Out there. Out to get US. A new world - aided by the internet and defined by government lies - provided fertile ground for the marginalised and the loons to join in, in the execution, the assassination the death of fact. Post fact broadcast by the net and nourished by trauma. All that overseas wars and domestic financial meltdown shit. All those coke head big swinging dicks who robbed and scammed with total impunity. But look we are old, established, integral, too big to fail. Throw the fucking dice. Who cares? Impunity. Occupy. Occupy the fucking toilet. Don't make me laugh. Laugh - like the great white/black hope that was Obama. Barack death of hope. Occupy the flagrant blatant Wall St excess. Bulls. Horns. Toredor. Keep the red flag flying? Fuck off and die. Bankers bailed out. Homeowners evicted. Out there ongoing warfare. Back here the mugging of globalisation. The seismic slap - manual goes digital. Get off yr arse. The buds not for you. The Mexicans are downing it. All of it. All this. And the Muslims. All the fucking immigrants. Somebody got to take the rap. Snowden says Big Brother is on the line. And who the fuck is flying the black helicopters. Russians. UN. Democrats. Liberals. And again the disappointment of Obama. Uppity. Downer. The emasculation of the globalisation. Balls. I got balls. A Glock too. Don't mess with me snowflake. And then treason? The Republican party? Get your head out of the meth lab and you can smell the robber barons lurking behind the party. What's going down man? Are you an American citizen? Extraordinary. Inequality. Militarisation. Rendition. Water board back to the Stone Age. Their families too. Enter a conman. White rage. Appalachian desperation. Snake oil salesman. Lies. treachery. Sociopath. Creature of the net. Reality tv. Glass beads sted of Glass-Steagal. KKK. Nurembourg. Walls. Immigrants. Rapists. Bad hombres. Crime. Gangs. Drugs. Carnage. Pure crystal rage. In the mirror a sociopath. In the white house, sociopaths. Up above the whine! The whine! The whine! Reaper. Drones. Hell. Fire. And brimstone! Shit. Just a wedding party. Hey it's a rock n roll world. Look! Russians in the cloud. In line. On the line. Raining golden showers. Who took my privilege? Send in the hookers. I want it back.Clowns. Back now. You hear. Don't talk too me about technology. Goddamn gay marriage. Uppity niggahs. Michele's arms. How very monkey. Donald- i know where I come from -Trump. Prez pervert. Porn star first lady. Smile! Terror. Fear of her sociopath. Tweeting in the meth-amphet dawn. Up there. Way up there. In drone land. Swamping the drain. Oiling the oligarchs. Fracking. Not Putin up with it. Dissent. Vlad wouldn't. There's a man. Fascism comes to America wrapped in a flag, tweeting insanity. And supposedly carrying a cross - doesn't seem that necessary anymore. Discrimination is the new family value. Them. Them. Them. Us. Us. Us. US is US or Them? Dig it. Dig in. Battle lines drawn. Here comes the war. Time to fight. Now or never. Hopefully see you on the far side. #RESIST
Posted by Barricade at 7:35 PM No comments: