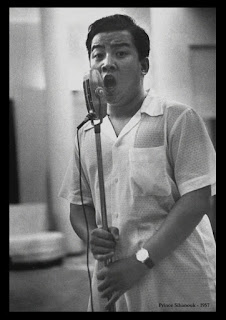 Catch King Sihanouk and all the other dramatic, mischievous and militant pieces of verbal and visual art in the critically acclaimed collection of digidelic delight 'I Love The Internet' here: http://itsapoeticalworld.com/book-shop/

* If anyone has any further tales to add, drop them in the comments box. Ta. K

It's panic stations...for the Soldiers of Destiny..

So the CJ/FF plumbers are called in.

'Who will rid me of this troublesome fact?'
old syphillitic snake eyes asks*

Paddy Public - those that matterd, those who voted in CJ's constituency - must be kept in the dark.

'There's an idea, keep them in the dark. Sure they are only a gully away from a dark hovel,' PJ said,

"Do you know what's great about my long arms? I can pat myself on the back! Pat...pat...what sort of fucking eejit is he getting caught!" PJ added.

Back in those pre-digital, smog shrouded days, rumours didn't travel like wildfire, they puttered across the city on chubby mopeds driven by two stroke madmen.

And the plumbers tailed them.

As the two strokes dropped the bundles of Herald and Press, the plumbers bought them up en masse.

The Blue Shirts and Stickies will  wreak havoc.

'It will be all law and fucking morality,' CJ spat with venom.

The local ESB sub power station meets with an accident.

Those who had still to vote were kept in the dark.

And this is the bit that says everything in case you think everything had not been said already.

...around midnight, with CJ victorious, a van pulled up outside the local FG HQ.

The back doors opened.

And bundles of 100s and 100s of papers were kicked out onto the street.

All in a potent gesture of fuck you.

It made me think the most judicious move might be to take a jaunt to the far side of the world.


*if Bob Woodward can do a little historical mind reading and dialogue 'recall' -why can't I?
Posted by Barricade at 7:44 AM No comments:


Cambodia's King Norodom Sihanouk, while being many things, was way more exceptional than the dilettante he is so often accused of being.

Only those with a truly spurious view of the world can believe that you can have a political career of that length and breadth by being a mere poseur.

In Sihanouk not alone did centuries collide but ideologies at their most virulent.

Privileged and pampered aside, he survived through sheer brilliant perseverance.

He was there with them all. Mao, Deng, Suharto, Nehru, Nixon, Kissinger, Ho Chi, Daddy Kim.
He was a star of the non aligned movement.
Then there was Maggie and Ronnie and then Mitterand.

He seemed thrilled to share the cavalcade with Mitterand.

But Hen Sen had the guns.

And the Khmer Rouge, withering on the vine, were seduced by Hun Sen before they could be reactivated by Hun Sen's co-prime minister and son of Sihanouk, Norodom Ranariddh.

He bought up the Khmer Rouge mainstream.

As the hardline imploded with murderous vengeance.

Here's the inrtrepid Nate Thayer on that tragi-comic end.

So the billionaire communists won over the socialist leaning royalists.

And Sihanouk retired to play a PR monarch role as father of the nation.

The country was finally at peace and had the stability of the tyrant.

There was no real room left for Sihanouk to move - and he was getting old.

So he bailed - leaving progress to 'tooled up' neo-liberalism.

And he went back to making movies.

But still, he made movies.

And he played sax.

In very many languages.

And wrote endless letters to journalists who had aroused his ire or interest.

Who was sometimes a buffoon.

Who was always engaging.

Who lived a life packed full of more drama and intrigue than any script would deem credible.

Who was a feudal lord - a divine King - in a country where AKs and bicycles were still 40 years after his coronation the only sign of the modern world.

Out in these centuries old villages WW111 was fought by puny proxy.

One thing that came from the sky that didn't bring death.

Helicopter largesse in a water-buffalo world.

Posted by Barricade at 6:05 AM No comments: